StephWomen Who Changed the World 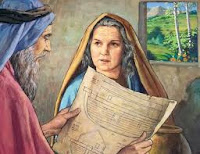 We often think of women who have changed the world as those who have boldly and loudly proclaimed that they would not be moved… that they would courageously take a stand for what is right… that they would charge forward challenging the status quo and take the front lines of a cause much bigger than themselves.

But not all world-changing women loom so largely and prominently over history. Some never receive fanfare, they just quietly change the world without even realizing it.


Noah’s wife was such a woman. She doesn’t stand as boldy on the pages of Scripture as women like Esther, but she stands, nonetheless. Her name was never mentioned. In fact, not much about her is known. But the silence of her life speaks very loudly about her influence.

She was Noah’s wife and as a wife, we know that whatever Noah walked through, so did she.

God saw Noah’s heart and called him to do, not only something way beyond him, but something that didn’t make any sense at all! Noah’s obedience to God’s divine decree would mean that he, his wife, their sons and their sons wives would endure a constant barrage of criticism that would last for about a century.

Think for moment about the last time someone made fun of your man. Consider your own response when someone hurled insults at your hubby, questioned his actions or tried to make him feel stupid for following God’s will.

Did your claws of protection come out or did you join the crowd and begin throwing a few of your own stones at your man?

Think about Job’s wife who, in the midst of her own grief, told her man to curse God and die. Or what about Lot’s wife whose feet hit the ground running, but whose heart wouldn’t believe the angels and wouldn’t leave Sodom. And consider David’s wife, Michal, who laughed him to scorn when he unashamedly danced in worship before the Lord.

We never read, “But Noah’s wife laughed when her husband commenced with constructing the ark.” We don’t find a mention of her buckling under the weight of embarrassment or ridiculing her hubby’s resolve.

Quietly… almost obscurely, she makes a mark on history with the silent assurance that is evident in a woman who is not only determined to stand by her man, but also believes her God.

Mrs. Noah could have dug her heels in and refused to be part of the ark building process. She may have even chosen to mock her man along with the multitude. But if that would have been her response, I believe we would have seen her heart revealed in Scripture and the outcome may have been different.

The continuation of the human race was hanging in the balance.

Gensis 6:5-6 tells us, “Then the Lord saw that the wickedness of man was great in the earth, and that every intent of the thoughts of his heart was only evil continually. And the Lord was sorry that He had made man on the earth, and He was grieved in His heart.”

But the Bible tells us that Noah found grace in God’s sight and that He chose to have mercy on mankind because of the heart of such a man… the kind of man who walked with God. (Genesis 6:9)

Mrs. Noah may not be so prominent in this world-altering story, but make no mistake about it, her influence is still echoing in the heart of every woman who understands the power of quiet submission to her hubby… even when it doesn’t make sense.

Her husband was known in the gates even though she wasn’t really even known at all.

Mrs. Noah took the taunting ‘like a man’, yet she proved to be a woman who would humbly follow her man even when the world was against him. She believed in him – and most importantly, she believed God.

May Mrs. Noah be a reminder to us all that when our husbands are being called by God to do something that doesn’t make sense, our response can make all the difference in the world.

So, how about you? Do you stand by your man? Is your husband being called to do something that doesn’t make sense and you’re struggling with the call? Do you believe in your husband? Do you believe God’s call is greater than your ability to understand it? Do you join the multitude when they mock your man or do you stick up for him?