Home Uncategorized When God Says No

When God Says No 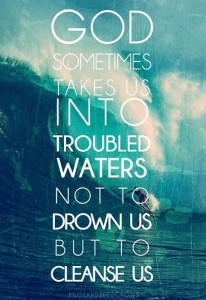 Have you ever wondered why sometimes you desperately want to do something for the Lord and you start moving in that direction, only to realize that your good idea was not really a God idea?

And it’s very painful! Isn’t it?

At least it is for me!

But God said NO.

And as I look back on it, I think He was saying NO the whole time. I just wanted my good idea to be a God idea and so I began making plans as if He were backing the whole thing. It wasn’t until it came down to the wire that I realized He had not really had His hand on the situation at all.

I wanted Him to back my plans. But He wants to LEAD the way.

Have you ever done that?

Have you ever asked God to back your good plans when He hasn’t lead you into that thing in the first place?

I discovered that I was like Paul when he desperately wanted to go to Asia, but God said NO.

“And they went through the region of Phrygia and Galatia, having been forbidden by the Holy Spirit to speak the word in Asia. 7 And when they had come up to Mysia, they attempted to go into Bithynia, but the Spirit of Jesus did not allow them. 8 So, passing by Mysia, they went down to Troas. 9 And a vision appeared to Paul in the night: a man of Macedonia was standing there, urging him and saying, “Come over to Macedonia and help us.” And when Paul had seen the vision, immediately we sought to go on into Macedonia, concluding that God had called us to preach the gospel to them.” Acts 16:6-10

Paul wanted to go to Asia, but God said NO. Paul attempted to take his team to Bithynia, but the Holy Spirit did not allow them to. Instead, He called Paul to Macedonia.

There, he met Lydia and some Bible studying women by the waterside in Philippi where he shared the Gospel and Lydia was saved. It was the launch of the first church in Europe and we see God working in very obvious ways.

I’m sure to Paul, it didn’t make sense.

But God said NO and he obeyed even though it may have broken his heart.

That’s what happened to me recently. God said NO and it didn’t make sense. But I had to obey.

I don’t know where my Macedonia is. I only know I will obey when God says, “This is the way, walk in it.”

And the lessons we learn? Well, they are definitely worth the pain of it all.

QUESTION: Have you ever had a GOOD idea that wasn’t a GOD idea? How did you handle it? What did you learn?

If you’d like to know more about beginning a M.O.M. Mentor Group, visit The M.O.M. Initiative at http://www.themominitiative.com/join-here/.

If you are interested in having me come speak at your next event to share a message about mentoring, how you can begin a M.O.M. Mentor Group or one of my other speaking topics, please feel free to contact me by clicking this link.