Reaction to the Comments Kirsten Dunst Made About Feminism & Gender Roles 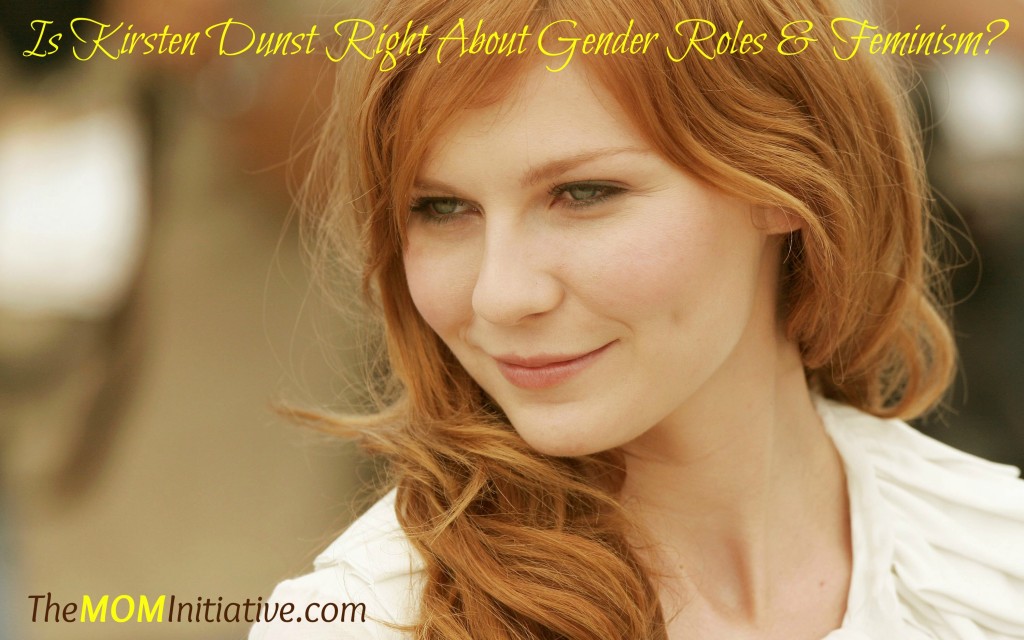 I shared this over at The M.O.M. Initiative yesterday and felt like it’s something I needed to share here.

We live in a very confused culture and the reaction to Kirsten Dunst comments indicate the confusion is deeper than many may have known.

Recently, I was watching the news and caught the end of a segment that focused on some comments made by actress, Kirsten Dunst. The news reporter mentioned how much  can i purchase clomid online her statements stirred the pot in the world of feminism and gender roles.

Because I didn’t catch the beginning of the news segment, I decided to do a little research. So I googled it and discovered her  Weingarten controversial comments were…

“And sometimes, you need your knight in shining armor. I’m sorry…You need a man to be a man and a woman to be a woman. That’s how relationships work.”

“I feel like the feminine has been a little undervalued. We all have to get our own jobs and make our own money, but staying at home, nurturing, being the mother, cooking – it’s a valuable thing my mom created,” she said in an interview for the May issue of Harper’s Bazaar.

When I read about her so-called crazy comments that made headlines and caused so much angst among feminists,  I couldn’t help but wonder how far feminism has strayed from femininity and how misunderstood and devalued the role of a woman, a wife and a mother has become.

How could her comments possibly cause such a stir?

I’m not sure, but I think that somewhere along the way, the goal of establishing equal rights for women has been confused with a woman being the same as a man.

Equality does not equal same-ness.

Men and women are different. Equal, but different. God did not create women to be less than a man. He created her to be equal with him.

BUT EQUAL DOESN’T MEAN THE SAME.

Unfortunately, the confusion has minimized the power of a woman in an attempt to magnify it.And in the process of establishing the feminist movement, the true power and beauty of feminism has been completely misunderstood and misrepresented.

What Kirsten Dunst said in her interview with Harper’s Bazaar was spot on. In fact, it’s pretty scary to think that someone really would take issue with it.

One of the messages I speak on is, “JUST a Wife and a Mother.”

We hear it all of the time. And one of the reasons anyone would include the devaluing term JUST before it is because feminism has drastically diminished the importance of a woman’s role.

Moms mold the hearts of the next generation. What role is more significant than that?

Being a mom isn’t easy…and being a good mom takes a lot of hard work. It’s a 24/7 gig that you put your whole heart into.

And a wife comes along side her husband and they work together to establish a home, to raise their children and to create a culture of faith, love, respect, and trust in their home.

So…JUST is a word that should never be used in front of wife or mother.

So, was Kirsten Dunst right? Absolutely.

Women were created for relationship. That includes being a wife. It’s normal, sweet friends. And it’s okay that it’s normal.

And, yes…women long for a knight in shining armor to come their way and sweep them off their feet. That’s normal too. But a woman must also be willing to seek out and wait for the man God has for her knowing that if she settles for less, he may be anything else but knightly.

And, yes…you need a man to be a man (how many women would shout AMEN to that?!) and a woman to be a woman (and this is one of the issues those in favor of gender neutral roles are opposed to) in order to have a relationship. Because, yes, that’s how relationships work.

I’m not a girly girl. I don’t chomp at the bit to head to the nearest mani-pedi spa. I’m not into perfume, Bath & Body Works, decorating, cooking and I don’t even like shopping. But I’m a woman who loves being a woman and I embrace that God has created me to be a woman. You don’t have to be a girly girl to be feminine. You don’t have to love frills and lace to love being a lady.

“Similarly, teach the older women to live in a way that honors God. They must not slander others or be heavy drinkers. Instead, they should teach others what is good. These older women must train the younger women to love their husbands and their children, to live wisely and be pure, to work in their homes, to do good, and to be submissive to their husbands. Then they will not bring shame on the word of God.”

Titus 2 is what we are called to and if we abandon our roles as wives, mothers, and mangers of our homes, then we abandon it at our own expense.

DO YOU AGREE OR DISAGREE WITH TODAY’S POST ABOUT GENDER ROLES, FEMINISM AND FEMININITY? WHAT WOULD YOU ADD?

HAS THIS MINISTERED TO YOU? IF SO, WOULD YOU SHARE THE LOVE BY SHARING IT?

REGISTER NOW for the