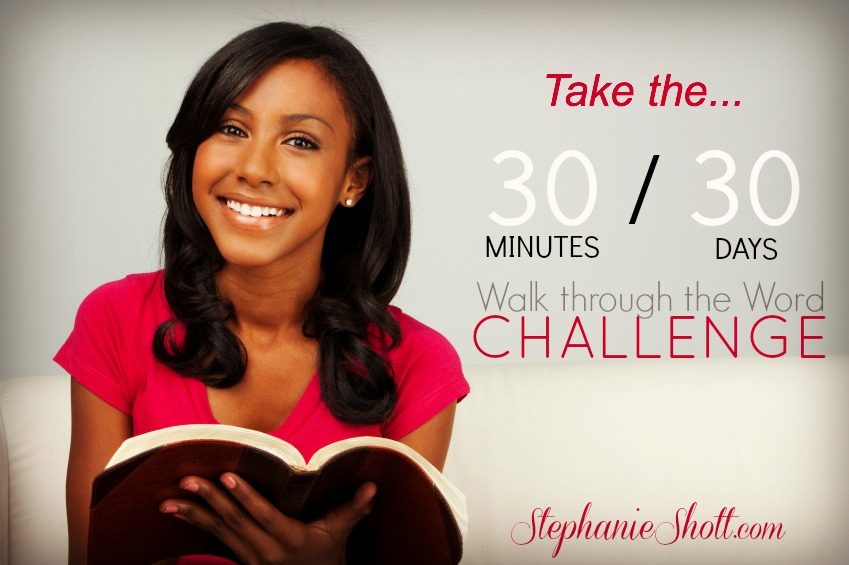 Well, here we are at DAY 5 of our 30 / 30 Challenge and finishing out this week by wrapping up our time in Ezra! I have to tell you, I absolutely LOVE reading God’s Word and Ezra has been such a treasure trove and such a challenging and encouraging book to read.

I hope you’ve enjoyed not only your time in the Word, but your time in prayer as we seek to spend 30 MINUTES for 30 DAYS in the Word…and ultimately increase our time as we discover there really is nothing like basking in the presence of the Living God!

SO, sweet friend, grab your journal or download this FREE PDF (Journal Your Way through the Word) and go get your 30! 😉

Ezra 9 – 10 ~ Okay, so I have to confess, this is tough for our free American culture to grasp. We marry for love. We have the freedom to choose who we marry, when we will get married and even if we want to stay married.

But marriage wasn’t like that in Old Testament times. Marriage isn’t even like that in much of the world today.

The marriages of that day were often pre-arranged, forced and an excuse to have sex with whomever they chose to.

Women married because they had to or because they thought if they did marry a specific person, at least they would be financially cared for, even if there were no emotions involved.

The children of Israel had been given a commandment by God not to intermarry with other nations. Those around them were pagan. They worshipped false gods and lived contrary to God’s will and God’s ways.

Ezra wept over their sin and was broken before God because they had broken God’s law.

There was a mass divorce that took place and the people repented of marrying those who were from other nations.

A few things to consider as we read this to help us in our understanding what was going on:

1. The events of Ezra, Nehemiah and Esther intersect and the timeline teaches us that they all coincide. In Esther 8:17, we read this…

“In every province and in every city to which the edict of the king came, there was joy and gladness among the Jews, with feasting and celebrating. And many people of other nationalities became Jews because fear of the Jews had seized them.”

A. Those who had intermarried from other nations had the opportunity to become Jewish in their beliefs. They were presented with an option to trust God and follow His will and His ways. Had they done that, their marriage would have remained in tact.

B. There is no mention in Scripture that God was FOR this course of action. Perhaps Ezra went overboard. Or maybe it was what he was supposed to do. But we aren’t given a green light from God on what Ezra did.

C. It’s important to read Scripture precept upon precept. Although choosing God over everyone else is part of what we are called to as Christians (Luke 14:26-27) we are not given permission to or commanded to leave an unbelieving spouse (1 Corinthians 7:12-16, 1 Peter 3:1-6)

We don’t always understand everything about Scripture. But when we read it precept upon precept, we get a much clearer understanding.

The final verses of Ezra we have a list of names of those who had chosen to break God’s law and their decision affected not only those they married but the children who were birthed into those families that should have never existed.

I would truly hate for my name to be written in Scripture for all eternity as someone who had broken God’s law. Someone who had chosen my own selfish desires over God’s will and God’s way. How about you?

QUESTION: DID YOU STRUGGLE WITH EZRA 9-10? DID TODAY’S ‘MY TURN’ HELP YOU CLARIFY WHAT WAS HAPPENING IN EZRA’S DAY?