Home Uncategorized 5 Ways to Overcome Your Fear of Public Speaking

5 Ways to Overcome Your Fear of Public Speaking 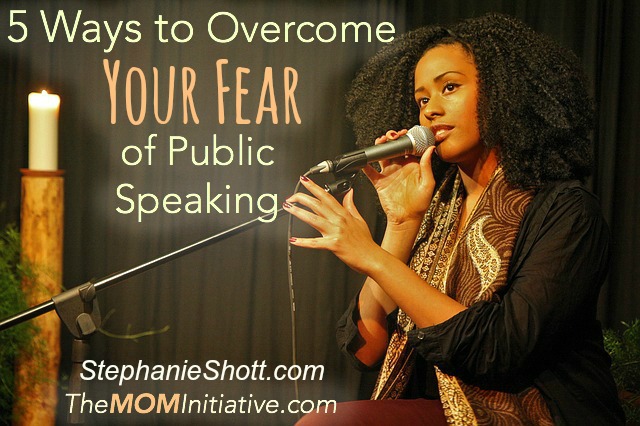 Whether I’m at a conference, a retreat, or some type of event, I almost always have a least one precious woman tell me she is feeling called to speak but doesn’t know if she can because she’s crazy afraid of public speaking. The very thought of getting in front of people makes her knee-knocking, tummy-turning, puke your guts up, sick.

I know that feeling well!

Fear is a factor no matter what the size of your audience and no matter how long you’ve been doing.

Statistics tell us that public speaking ranks as the number 2 fear people face. And since dying is number one, you get the idea of how great the fear of public speaking is.

Some avoid getting anywhere near a microphone while others try it once or twice and then give up. But if you are going to be all God has created you to be, you can’t let fear paralyze you and steal even one second from what God is calling you to do!

So, how do you overcome the fear of public speaking? How do you step behind a microphone without shaking like a leaf or feeling like you’re going to melt right there in front of everyone?

Part of the solution is found long before you ever put the microphone to your lips – the other part is what you do once you’re there. So, here are 5 tips that can help you overcome the fear of public speaking:

Got fear? Here are 5 tips that can help you overcome the fear of public speaking

Bua Yai 1. Take your thoughts captive. We tend to make mountains out of molehills and then wonder why our knees are knocking and stomachs are turning at the mere thought of standing behind a microphone. Don’t over-think the scenario of your speaking engagement. Honestly, it’s just a group of people… you know… people like you – people like the ones you talk to on a daily basis – people like the group of friends you have a conversation with. Just people. So don’t let you mind linger on the event looming largely on your horizon… Don’t allow your thoughts to make your speaking experience more than what it is.

http://thmiii.com/wp-json/oembed/1.0/embed?url=https://thmiii.com 2. Know your stuff. Those who have gathered to hear you speak are there for a purpose. Be thoroughly prepared before you ever head for the platform. Make a road map of your message. Know where to begin… where you want to take them… and where you want to end. Practice your message out loud a million times. Some even practice in front of the mirror (I don’t do that myself because it’s a little too awkward for me).

4. Break the ice. The first minute or two of an event is a bit awkward for the speaker and the audience. So, open with something light and even funny. It breaks down the walls that surround you and helps them discover you’re just a real woman with real issues who serves a real God who is real in real life. I normally start with something ridiculously stupid I’ve done that I can relate to the message. Laughter is definitely an ice-breaker!

Doing these 5 things doesn’t mean you’ll never be nervous again. I’m nervous every time I step up to the mic. But it does mean you’ll know how to overcome that fear and get busy doing what you’re called to do.

Don’t let fear prevent you from fulfilling your call for one more second. Nothing you fear is bigger than the call God has placed on your life.

Would you add anything else? What other advice have you heard (beside the one about picturing the audience in their underwear!)