Three Characteristics of a Godly Woman 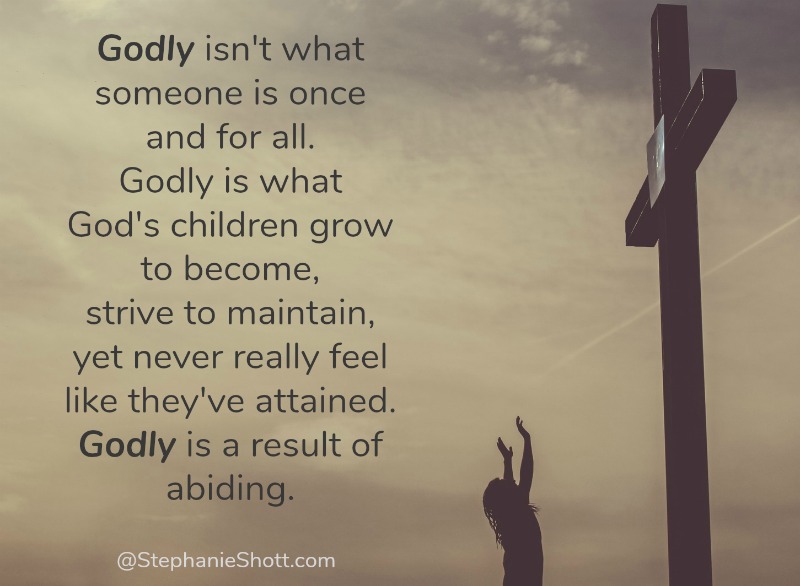 After I became a Christian, it didn’t take long for me to learn that just because I was saved that I would automatically become a godly woman.

I looked up to those precious women whose words oozed with grace and whose lives made us all want to know the Lord like they did. They had something I didn’t…and I wanted it.

It’s supposed to be that way.

So often we heart that we shouldn’t compare. But discipleship by its very nature causes us to compare in a healthy way. Not to compete but to grow.

I tucked myself under their wings whenever I could.

That’s when I discovered that godly isn’t what someone is once and for all. Godly is what God’s children grow to become, strive to maintain, yet never really feel like they’ve attained.

The answer is inscribed in Holy Writ and beckons us to simply abide in Christ.

“1 I am the true vine, and My Father is the vinedresser. 2 Every branch in Me that does not bear fruit He takes away;[a] and every branch that bears fruit He prunes, that it may bear more fruit. 3 You are already clean because of the word which I have spoken to you.4 Abide in Me, and I in you. As the branch cannot bear fruit of itself, unless it abides in the vine, neither can you, unless you abide in Me.

5 “I am the vine, you are the branches. He who abides in Me, and I in him, bears much fruit; for without Me you can do nothing.”

So, what are some identifying characteristics of a godly woman who has been born again by the Living God… a woman who loves Jesus because He first loved her, a woman who is committed to live godly in this generation?

She seeks God’s face in prayer. She worships Him with life as well as her lips. Prayer is like inhaling life from the Lord and worship is like exhaling love to Him.

God’s Word is food for her soul and like blood rushing through her viens. She loves His Word because she know and loves the Author… the One who loves her with an everlasting, unconditional, uncontainable and undeniably relentless love.

Her service for the Lord comes from an overflow of her relationship with the Lord, not as a substitute for it. She serves because she can’t get over the fact that He invites her to be part of what He is doing on this planet. She finds her place. Seizes each moment. And never ceases to stand amazed that Jesus saved and made her eternally His.

The beauty of these three characteristics is how they work in tandem together.

It’s all very centric to being a godly woman.

Today, you have the opportunity to take some intentional steps to becoming the godly woman you long to be.

Are you hungry to be like those godly ladies who inspire you to be godly too?

Will you be a woman of WORSHIP?

Will you be a woman of the WORD?

Will you be a woman who will WORK?

Would you take some time to share with me about your own experience of abiding with Christ? What that has done in your life or in the life of someone you know? What have you learned from godly women in your life?